Are you thinking about an SMT, RMT, ANR, or Video Production Project for your upcoming public relations campaign?
Let us help you navigate the current media environment, develop the best media hook to get your story on-the-air, and design a market strategy to guarantee results! 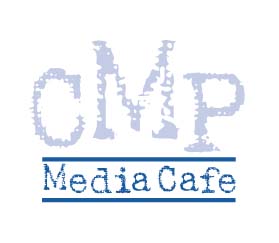 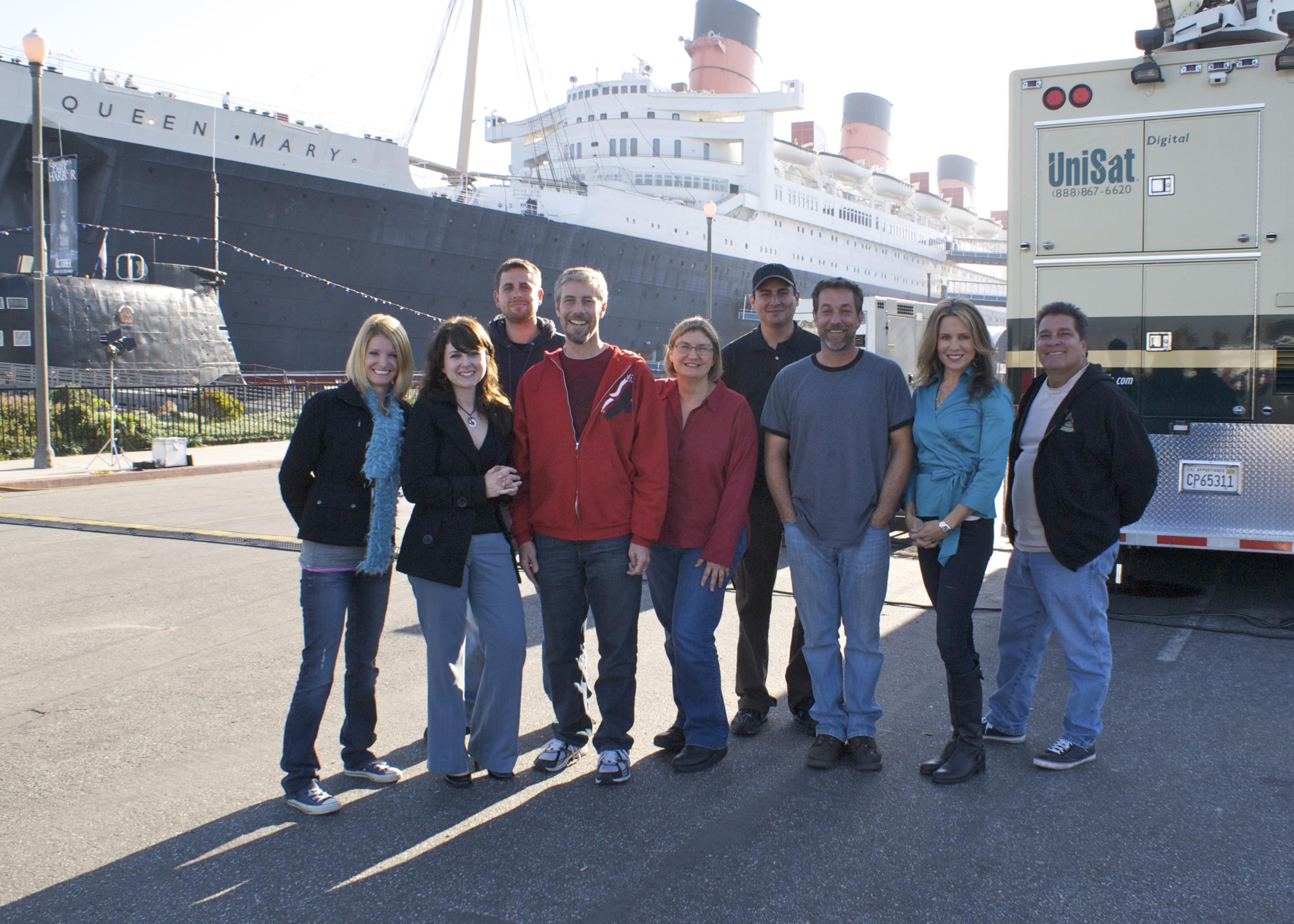 CMP Media Cafe is a small company with big company results that serves Fortune 500 clients, PR Agencies, small businesses, and individuals. We work closely with you to develop your broadcast media project from broadcast content creation to results and guide you through every step of the storytelling and production process.

We ensure that your story and digital media captures the attention of TV newsroom and radio broadcast decision-makers, public service directors and ultimately, television and radio audiences.

On-Site Production Capabilities in the U.S.A. & Around the World:
CMP Media Café steps in as your very own in-house media production department. From Los Angeles to London, from Tampa to Tel Aviv, we creatively capture your corporate news story at any location in the United States and around the world. Whether it's a live broadcast with a satellite media tour, webcast, social media live event, or a tracked digital video package to meet your campaign and messaging objectives, we get your message into newsrooms and on-the-air. 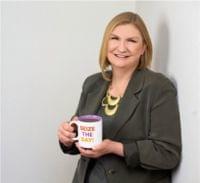 Former Network TV Producer, Marianne Schwab, brings high quality national experience to every project she produces as the Executive Producer at CMP Media Cafe. She has an extensive background in broadcast and corporate television that spans over twenty-five years.

Marianne has produced in 25 countries on four continents and field produced and directed video shoots and live television satellite media tour broadcasts in over twenty states in the U.S. -- from the beaches of Hawaii to the sandy shores of Florida and lots of less exciting locations in between.

No one knows more about the types of stories that producers are looking to book on their show than a former network television producer.  Marianne is the “go to” person to show you how to harness the power of media by crafting an irresistible message using her road-tested storytelling techniques that guarantee media attention.

Based in Los Angeles, she uses her insider expertise to help Fortune 500 companies and the public relations agencies who represent them, create newsworthy story angles producers are eager to book on their programs.  Thousands of interviews promoting a wide range of messages have been booked on local and national TV and radio shows as a result.

At CMP Media Cafe, Marianne also provides comprehensive media training for satellite media tours, radio media tours, and broadcast interview appearances. Her book, The Insider's Guide to Media Training, is an essential manual for all P.R. pros.  She shares her behind-the-scenes secrets to creating the right kind of pitch that captures the attention of broadcast decision makers and also provides her media training expertise so that business influencers can ace their on-camera interviews.

Marianne's producer credits include LIVE with Regis & Kathie Lee, Lifestyles of the Rich & Famous, Runaway with the Rich & Famous (where it was her job to design and create five-star luxury vacations for celebrities -- and send a video crew along to capture the "magic"), E! Entertainment Television ON E! Specials, ABC-TVs Home Show, George & Alana, and many more. 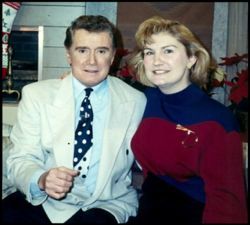 Regis Philbin & Marianne Schwab
On The Set of LIVE w/Regis 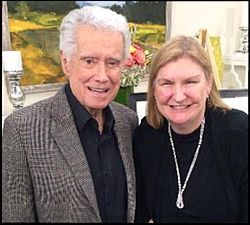 Marianne Schwab was a producer for LIVE with Regis & Kathie from 1989-1990.  When Marianne moved on to Runaway with the Rich & Famous, she produced a travel feature with Regis and his wife, Joy, on the Orient Express.  Last year, while Regis was guest hosting on Hallmark's Home & Family, they were reunited on the set (since Marianne is a friend of the show) just ahead of her book launch for Insider's Guide to Media Training.

Prior to founding CMP Media Cafe, she worked with the pioneers in broadcast video public relations launching the West Coast production unit for Medialink in 1996. While there, she also wrote and produced over 125 narrative and b-roll newsfeed packages, electronic press kits, satellite media tours, public service announcements and corporate videos.

Marianne is a sought after speaker for professional conferences, workshops, and live events. She engages her audiences with her ability to reveal the "wizard behind the curtain"  behind-the-scenes in pitch meetings of national shows to educate public relations professionals on what they need to know to improve their results with decision makers.  She has her finger on the pulse of what's working in media today whether is TV, radio, online, or social media.  Her hot speaking topics include “Mastering Storytelling Techniques to Increase Results,” “The Perfect Pitch for Producers,” and more. Contact CMP Media Café for details on booking her for your conference, workshop, or panel.

On a Personal Note:
Marianne grew up in a small Indiana town, took a bite out of the Big Apple, then settled in La-La Land because she needed more sunshine and "good hair days."  Her guilty pleasures include wine tasting, road trips, cycling, and binge watching spy thrillers and Britcoms because she's a bit of an Anglophile.  She is a closet geek who loves museums, documentaries, and tech talk.  She also is just two cats shy of "crazy cat lady" status and is the proud rescuer of two Norwegian Forest Cats, plus one NFC that rescued her.

Some Broadcast Career War Stories and Tid Bits:
• Interviewed NBA Star, Kobe Bryant, for Adidas just before he signed with the L.A. Lakers right out of high school and launched his iconic career.
• Traveled to Finland’s Arctic Circle to produce a Search for Santa feature with Travel Editor Peter Greenberg at ABC’s Home Show.  While there, she traveled on snowmobiles, dog sleds, and a reindeer sleigh.
• Secured one of only four interviews legendary actor, Christopher Plummer, gave on the red carpet at the Spirit Awards the night before he won his first Oscar at the age of 82.
• Responsible for the first national television appearance of worldwide music sensation Yanni on LIVE with Regis and Kathie Lee. [Note: Yanni now has a net worth of $40 million.]
• Featured Pope John Paul II’s visit to Malta for Runaway with the Rich and Famous.

Please contact Marianne Schwab, Executive Producer, CMP Media Café at (213) 986-8070 to book a broadcast content devleopment session and she'll work with you to design the perfect storytelling angle for producers and newsrooms. 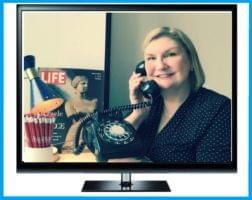 Need Help Developing a Media Angle That Gets Results?  I'd love for you to book a 30-Minute Broadcast Services Strategy Session for your SMT, RMT, ANR, or Video Project with me, Marianne Schwab, a Former Network TV Producer So You Can Get Get a Blueprint for Your P.R. Campaign. 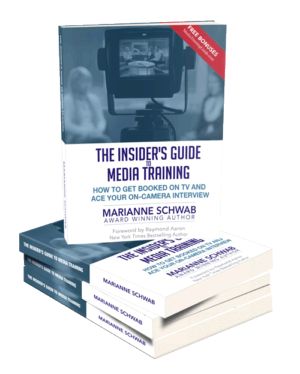 CMP Media Cafe's Executive Producer, Marianne Schwab, is a Former Network TV Producer and the author of The Insider's Guide to Media Training where she shares her behind the scenes secrets to help celebrities, book authors, chefs, doctors, business executives, bloggers, speakers, small business owners, and experts in all specialties with tips to ace their on-camera interviews and radio appearances.   Thousands of interviews promoting a wide range of messages have been booked on local and national TV and radio shows using her broadcast content creation techniques.
Get The Book Now Available on Amazon
"Publicity is absolutely critical.
A good PR story is infinitely more effective than a front page ad."
~ Richard Branson ~
TV & Radio Services